Every church has a story. CBC’s is a work in progress, being furthered every year by the work of Christ. Our permanent facility was not always located on Rt. 184, Groton, Connecticut. It began humbly, with a pastor and his family on the other side of the country. 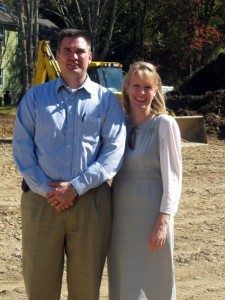 Pastor John Ludka and his family moved to New London County in November of 1999. After serving as an assistant pastor in a large church in Long Beach, CA, he felt God’s leading to return to his home of Southeastern CT to plant Community Baptist Church. The growth of this area was indication enough that New London County needed a strong, Bible believing church with a friendly spirit. But it was meeting seven different people from Groton while in California that specifically confirmed the direction of the Lord’s will. Stepping out in faith, Pastor Ludka trusted God to establish a dynamic church in Groton. There were no people, no buildings, and no salary…just a heart of faith and the call of God.

These events marked the beginning of God’s blessings on CBC!

After weeks of prayerful preparation and personal visitation throughout the community, opening day arrived! In April of 2000 Community Baptist Church had its first “get acquainted” service. Pastor Ludka specifically prayed for one soul to be saved during the first meeting as a final confirmation of the Lord’s will.That prayer request was granted when one person trusted Christ as their Savior! Additionally, many people decided to make this church their new church home in that day. These events marked the beginning of God’s blessings on CBC!

At its inception our church didn’t boast magnificent buildings or a dynamic choir, but word quickly spread that there was something exciting happening at that hotel across from Wal-Mart! Services were held in a hotel conference room. Guest rooms were utilized for nursery and junior church. The hotel pool even served as a makeshift baptistry! Yet, if you had asked the people coming to Community Baptist they would have said they didn’t mind because this was the church where they belonged, and were grown spiritually through the preaching of God’s word.
After we squeezed 88 people in, we realized it was time to move on!

While CBC wouldn’t have a permanent home until 2009, our next location witnessed twelve decisions for Christ in the first service with 149 souls in attendance. The Lord continued to bless our ministry in providing a suitable property to build on. The future home of CBC began to take shape, and in February of 2009 those attending rejoiced at God’s goodness in their permanent facility!

After moving into our new building we have continued to serve the Lord relentlessly. CBC has a warm and inviting space, but it isn’t the building that brought us a record breaking Vacation Bible School in 2013, encouraged three men to attend Bible college, or moved hundreds of souls to salvation. The true spirit of Community Baptist Church is found in the hearts of its pastor, and people, while the power to effect change comes directly from the hand of God.

Since its first service twelve years ago Community Baptist Church has remained true to its original vision–to impact the community, lead others to Christ, and disciple believers …

Since its first service twelve years ago Community Baptist Church has remained true to its original vision–to impact the community, lead others to Christ, and disciple believers into a deeper knowledge of Jesus Christ. In those twelve years we have seen twelve men surrender to the calling of the ministry, disciple men and women through our Community School of the Bible Institute, and minister to the surrounding military community. Come grow with us as we strive to be ready always and see what new opportunities, challenges, and blessings the Lord has in store for us.

1 Peter 3:15 “But sanctify the Lord God in your hearts: and be ready always to give an answer to every man that asketh you a reason of the hope that is in you with meekness and fear.”